The first full trailer for Rob Zombie’s “The Munsters” introduces the classic family of monsters as you’ve never seen them: not just in color but telling a classic love and origin story inspired by the ’60s sitcom.

You can see why “The Munsters” is a passion project for Zombie, and the trailer proudly announces that this campy and colorful looking family movie comes from the director of R-rated horror like “Halloween” and “House of 1000 Corpses.” The film is a live-action, PG-rated take that tells how Herman Munster met and married Lily in her search for true love, and Grandpa’s initial effort to stop this matrimony.

“I knew the moment I laid eyes on you that you were special. I understand if you don’t feel the same,” Lily says to Herman in the clip. “I’m just a regular gal living a normal, boring life.” 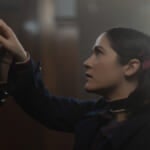 The first trailer, which Zombie first released through his Instagram on Wednesday and you can watch below, also announces that the film will debut this September.