NASA has revealed the winning shots from its fourth annual Photographer of the Year awards, providing an intriguing behind-the-scenes look at some of its most ambitious research projects.

The US space agency has announced 12 winning images – four each in the first place, second place and third place award categories – all taken by its own photographers.

In one of the first place shots, NASA photographer and researcher Jim Ross takes a selfie from inside the F-15 Eagle N897NA fighter aircraft, used as a test bed for flight research experiments.

Other images across all the categories include a tour of a 120ft wind tunnel, a trek across a fake lunar surface and a SpaceX Falcon 9 rocket during sunrise. 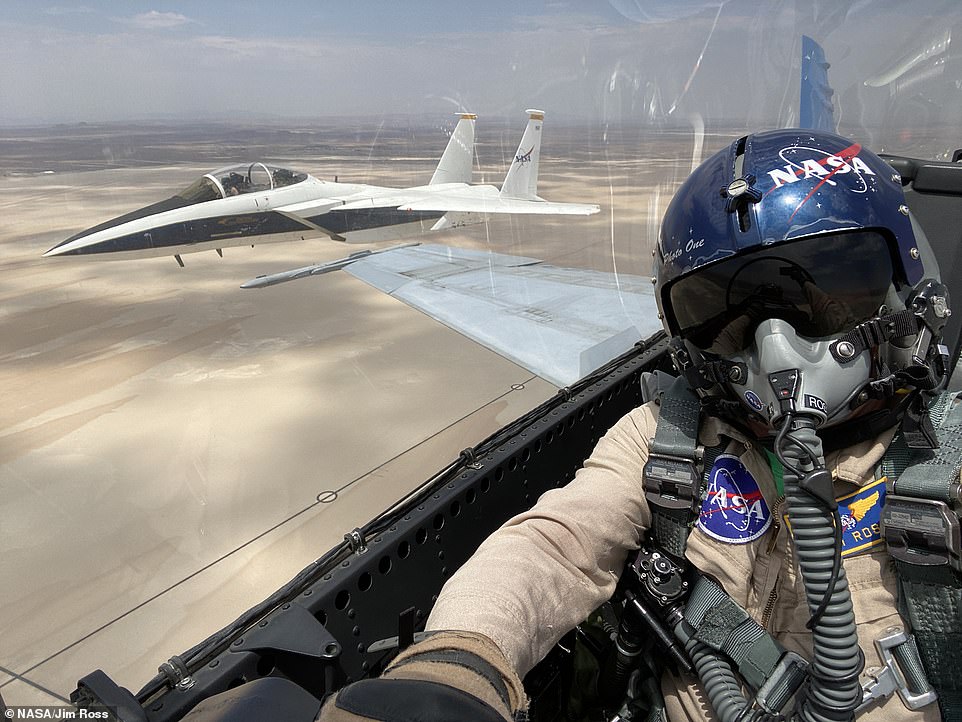 In this shot, NASA photographer and researcher Jim Ross takes a selfie from inside the F-15 Eagle N897NA, used as a test bed for a variety of flight research experiments

MailOnline has taken a look at some of the best shots, which NASA posted to Twitter and uploaded to its online image library. 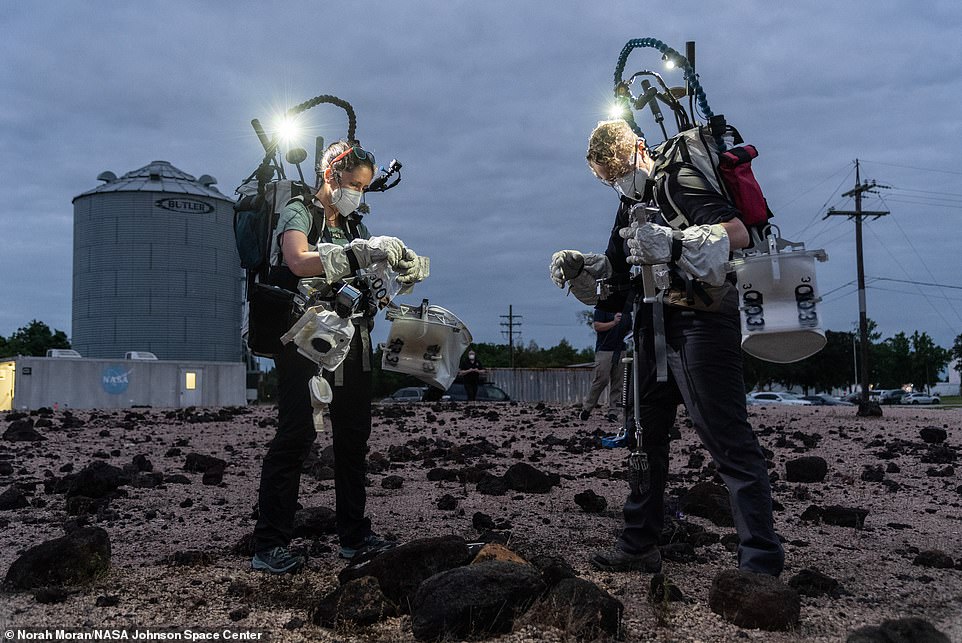 It consists of various slopes, grades, simulated craters and strewn rock field conditions, to replicate the dusty conditions on the Moon and Mars.

In another shot, a crew from Blue Angels, the flight demonstration squadron of the US Navy, tour the inlet of a 80-by-120-foot wind tunnel test section, taken by NASA photographer Dominic Hart.

NFAC’s wind tunnels are primarily used for aerodynamic and acoustic tests of rotorcraft and vertical and/or short take-off and landing (V/STOL) aircraft, and for developing advanced technologies for these vehicles.

The Blue Angels crew are dwarfed by the massive wind tunnel, which looks like a minimalistic building façade from a futuristic city. 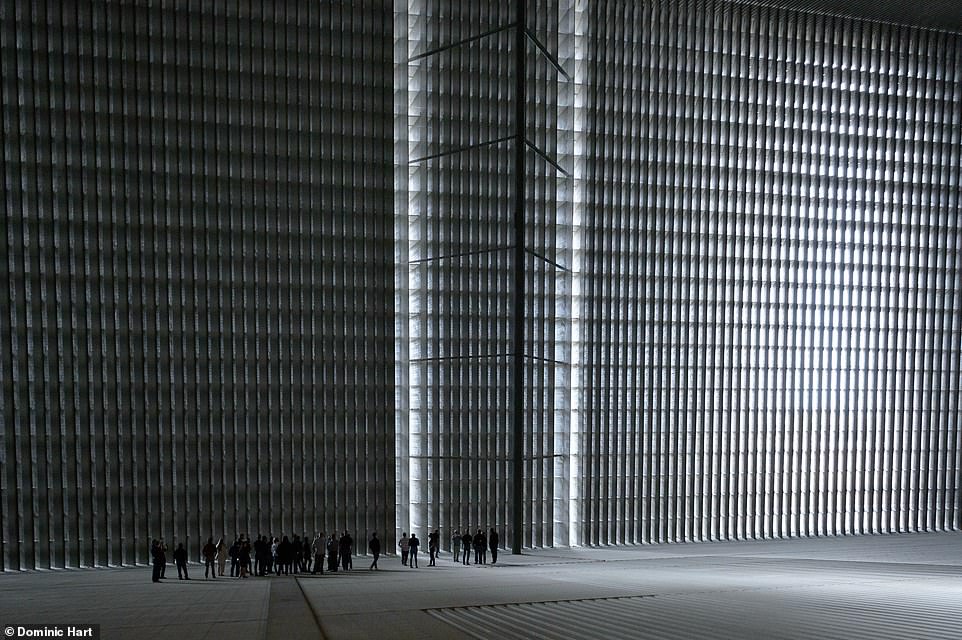 Fischer is pictured torqueing a ‘force gauge ring’ on to a vibration table in preparation for vibration testing of the PACE Earth-observing satellite, currently being built.

PACE, which stands for ‘Plankton, Aerosol, Cloud, ocean Ecosystem’, will observe global ocean colour, biogeochemistry and ecology, as well as the carbon cycle, aerosols and clouds.

After it launches in 2024, it well improve understanding of how the ocean and atmosphere exchange carbon dioxide and identify the extent and duration of phytoplankton blooms. 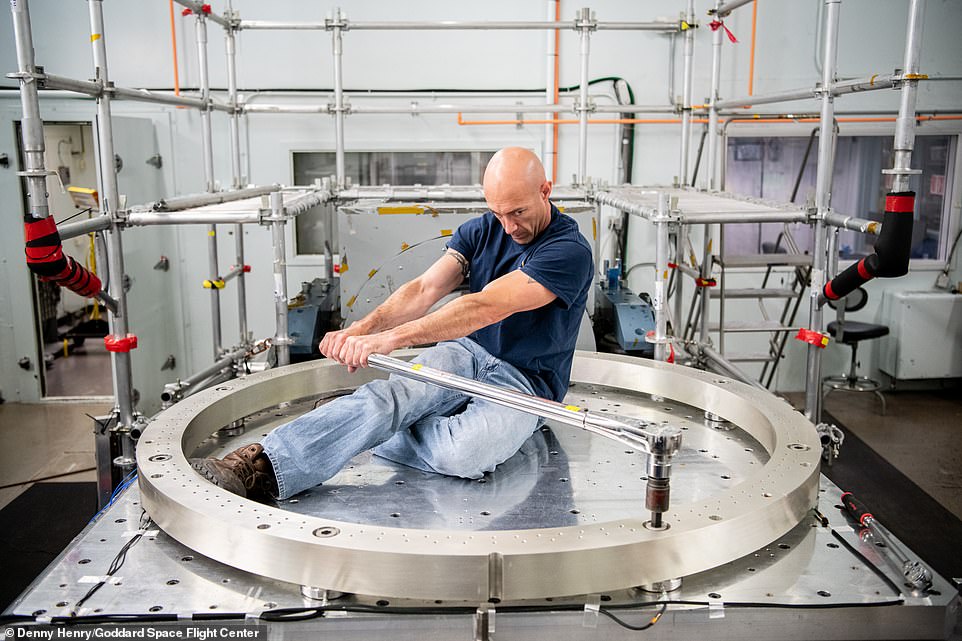 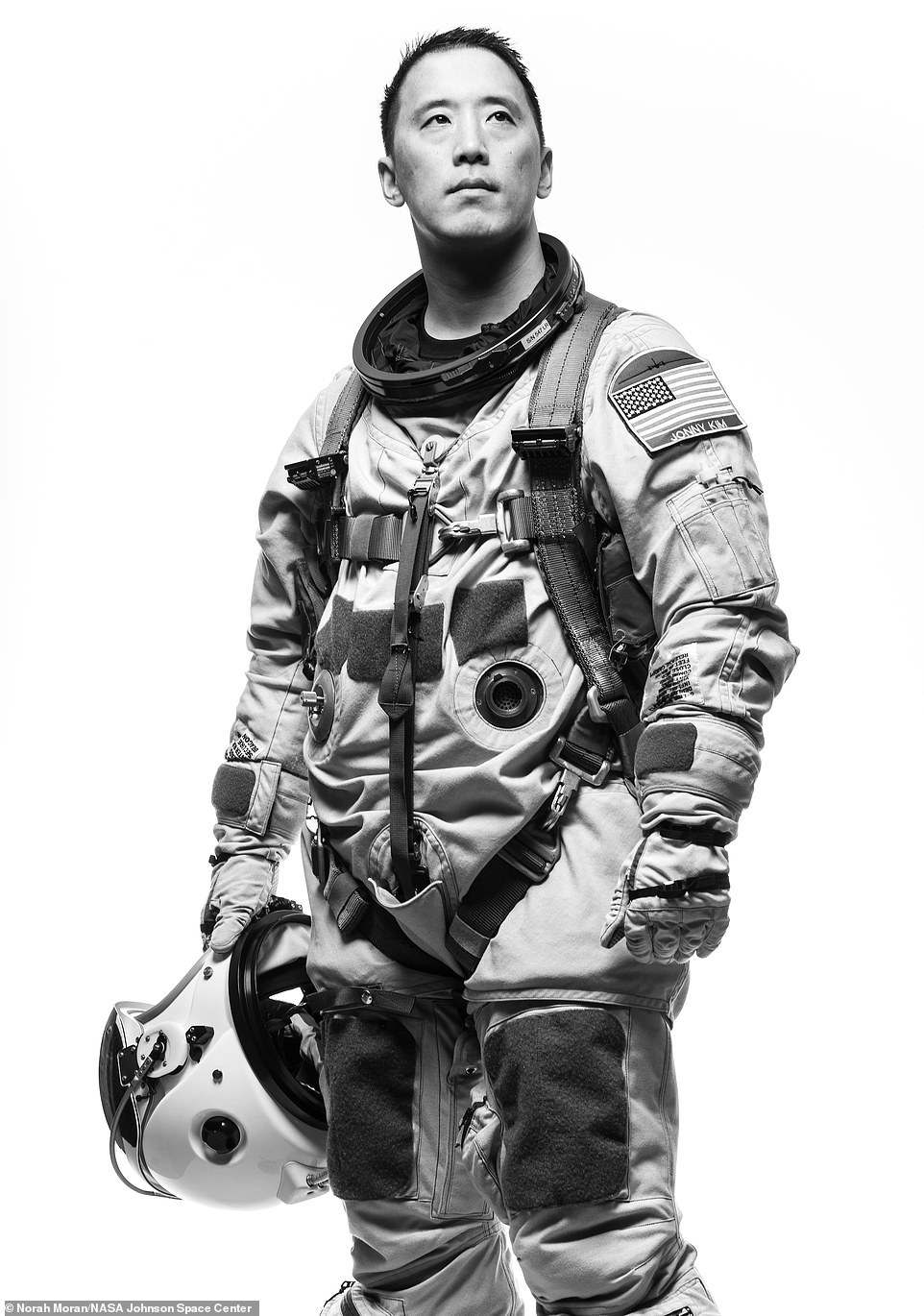 NASA astronaut Jonny Kim wearing a high-altitude pressure suit worn in the WB-57 aircraft, which is capable of flying at altitudes over 60,000 feet 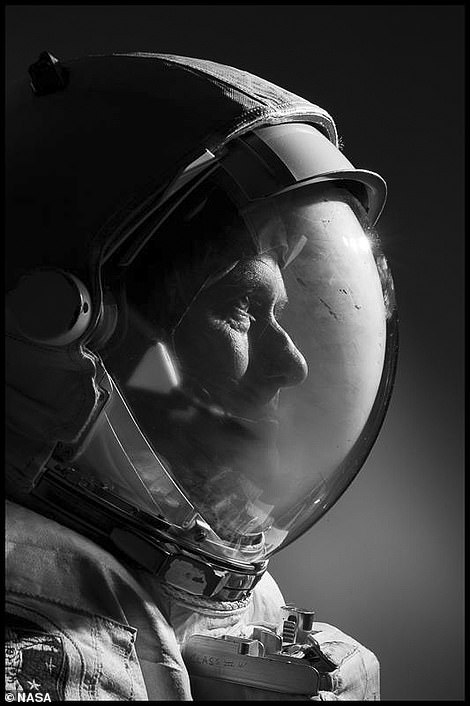 NASA has unveiled the winners of its internal ‘NASA Photographer of the Year’ contest, recognising the best shots by the agency’s own photographers

In a stylist black and white shot in the second place category, NASA astronaut Jonny Kim is seen wearing a high-altitude pressure suit, in preparation for a flight in the WB-57 aircraft.

WB-57 is a long-range aircraft capable of operation for extended periods of time from sea level to altitudes over 60,000 feet, and so is used by NASA for high altitude atmospheric research.

The craft can fly for approximately 6.5 hours, has a range of approximately 2500 miles, and can carry up to 8,800 lbs of payload.

Kim is among the astronauts in training for a manned mission to the moon, as part of NASA’s hugely ambitious Artemis space programme.

Artemis aims to send the first woman and the first person of colour to the lunar south pole by 2025 – and mark the first time humans have walked on the moon since Apollo 17 in 1972.

Another second-placed shot shows a silver spacesuit being tested in an ‘anechoic chamber’ at Johnson Space Center in Houston, Texas.

Anechoic chambers have soft, sound-absorbent material on the walls, ceiling and floor, all at odd angles, to stop reflections of sound or electromagnetic waves.

They’re said to be ‘the quietest places on Earth’ – so quiet, in fact, that someone standing inside one can hear their own heart beating or even their lungs breathing in and out. 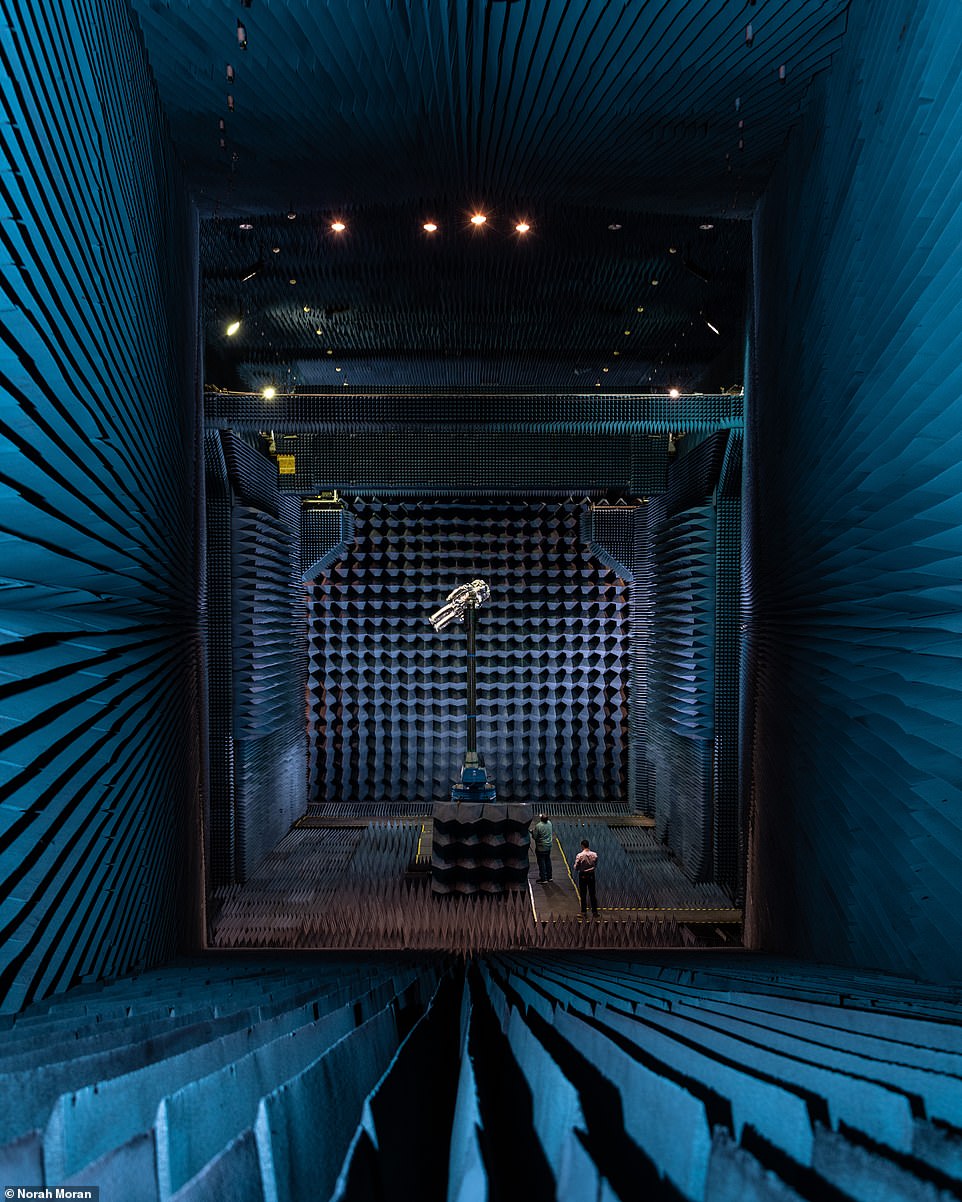 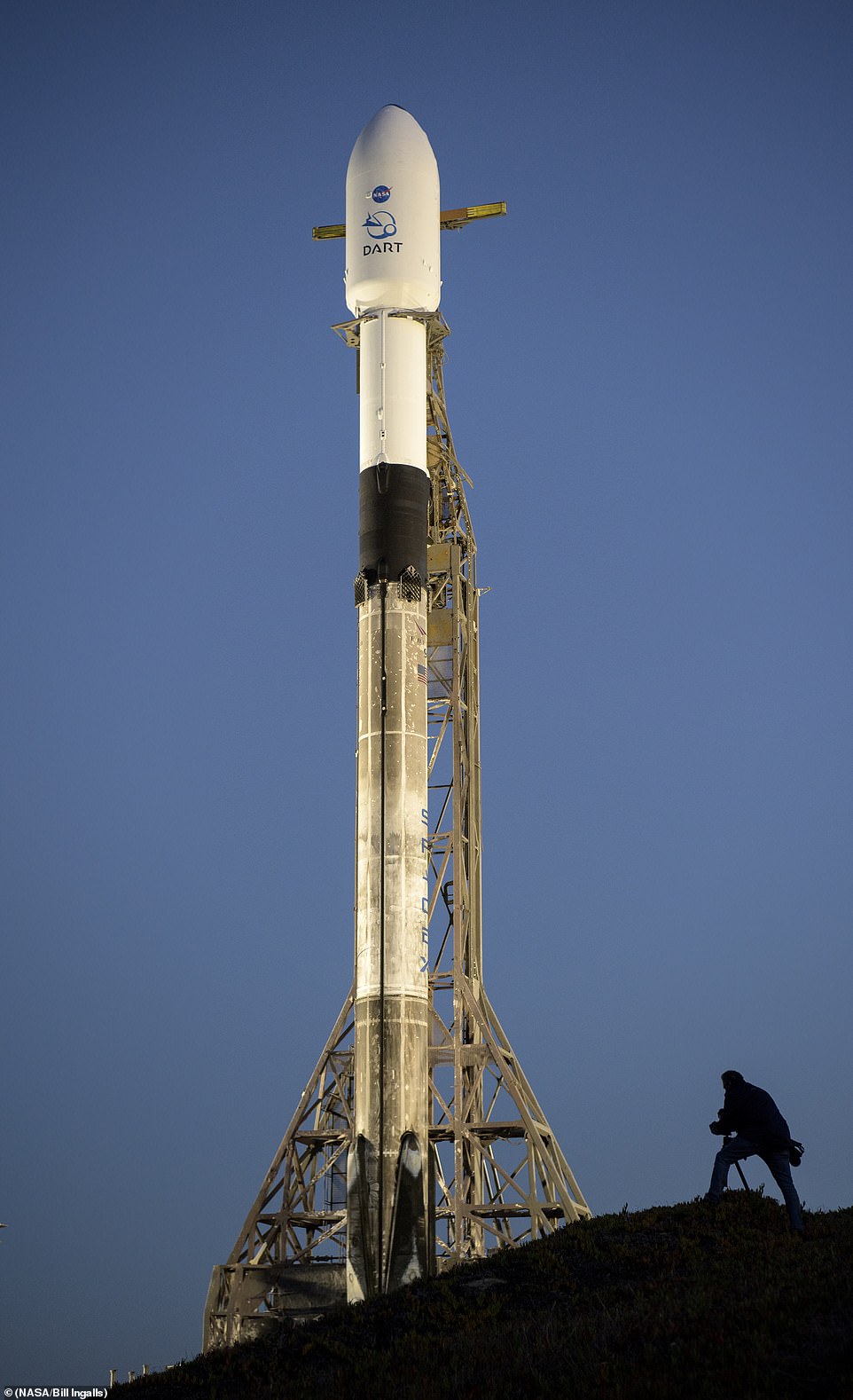 The SpaceX Falcon 9 rocket with the Double Asteroid Redirection Test, or DART, spacecraft onboard, is seen during sunrise, Tuesday, November 23, 2021, at Space Launch Complex 4E, Vandenberg Space Force Base in California 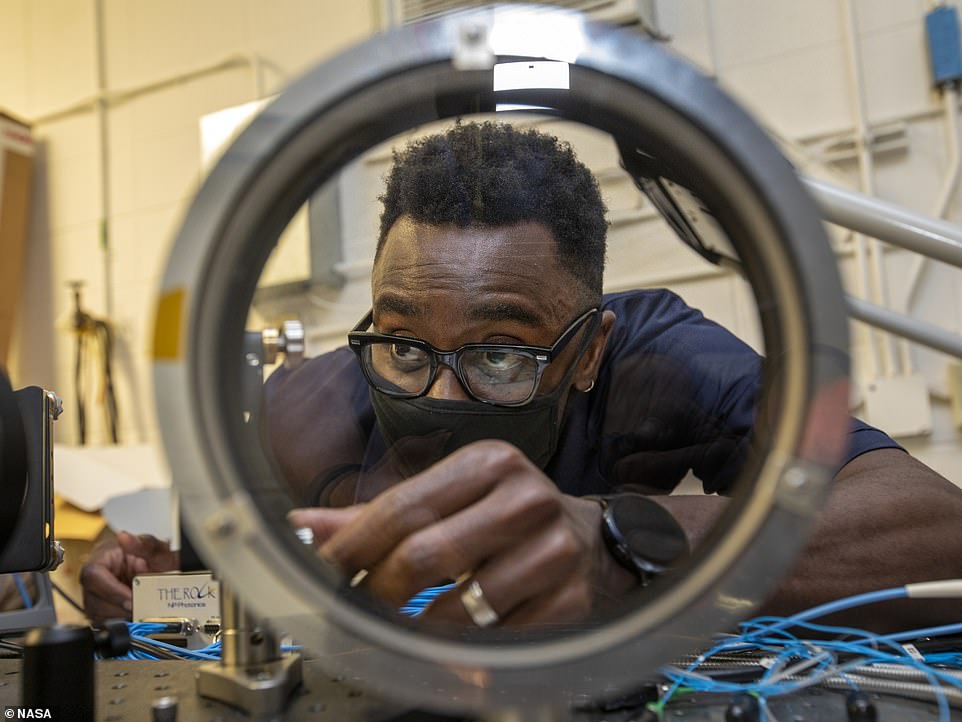 NASA says it uses anechoic chambers to simulate an open space environment and test how antennas on a space suit might work.

In the third place category, one of the winning entrants shows the SpaceX Falcon 9 rocket at Space Launch Complex 4E, Vandenberg Space Force Base in California last November.

The rocket is pictured on November 23, a day before its launch of the Double Asteroid Redirection Test, or DART, spacecraft, a box-shaped space probe created by NASA and the Johns Hopkins Applied Physics Laboratory. 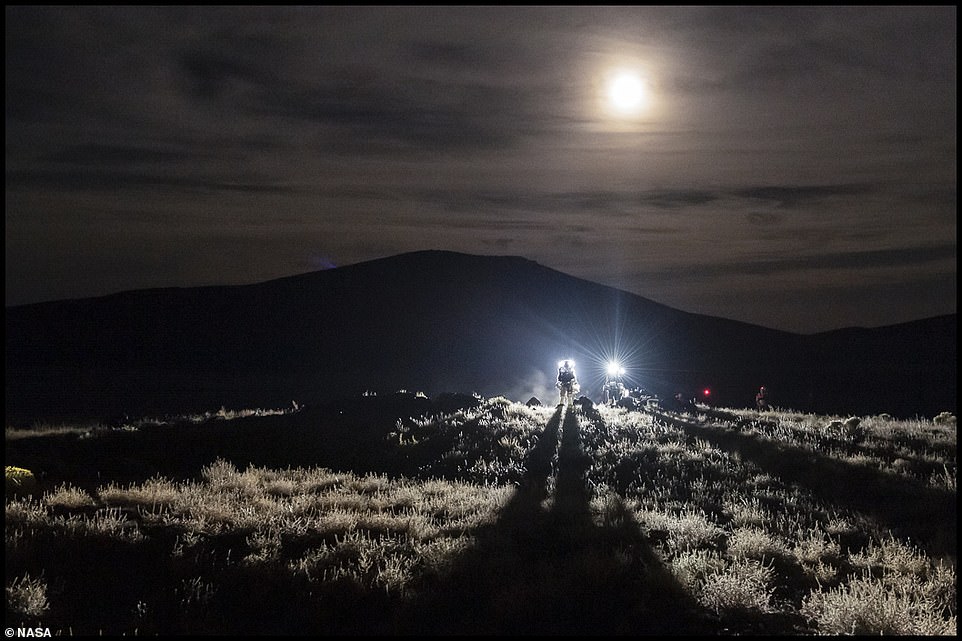 The US space agency has announced 12 winning images – four each in the first place, second place and third place award categories – all taken by its own photographers 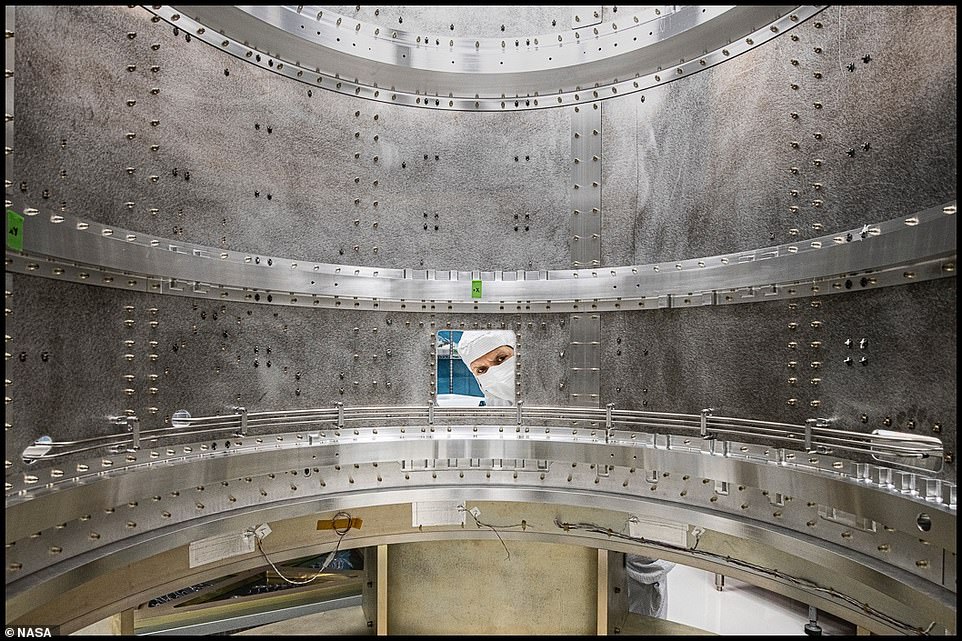 Later this year, DART will smash into the small asteroid Dimorphos, which orbits a larger asteroid called Didymos, at 13,500 miles per hour (21,700 km per hour).

When it hits Dimorphos, the 1,210 pound space probe will change the speed of the 525-foot-wide space rock by a fraction of a per cent.

Although Dimorphos doesn’t pose a danger to Earth, NASA wants to measure the asteroid’s altered orbit caused by the deliberate collision.

Also among the entries is the James Webb Space Telescope (JWST), prior to its blast off from Guiana Space Centre on Christmas Day last year. 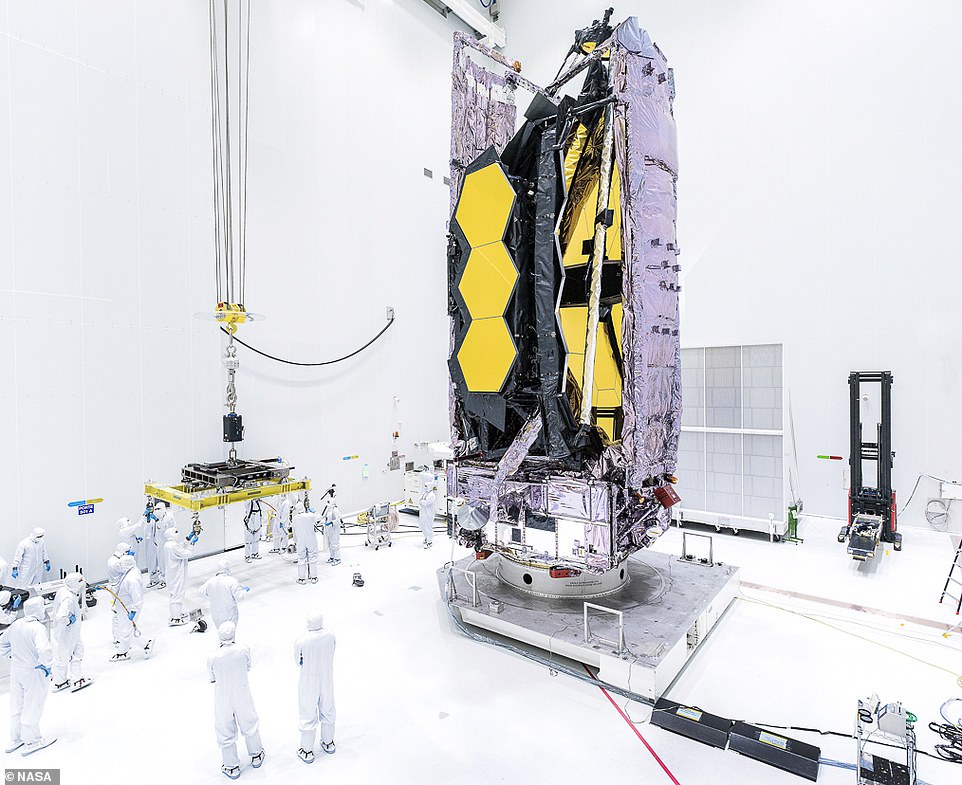 James Webb Space Telescope blasted off from Guiana Space Centre on Christmas Day and settled into its orbit one million miles from our planet last month. It’s pictured here with its sunshield (a five-layer, diamond-shaped structure the size of a tennis court) folded

It’s pictured with its sunshield – a five-layer, diamond-shaped structure the size of a tennis court – folded, while surrounded by engineers.

In January, the telescope deployed all of its mirrors, and days later it reached its parking spot at Lagrange Point 2 (L2), an area of balanced gravity between the Sun and Earth.

James Webb will spend more than a decade at L2 exploring the universe in the infrared spectrum, allowing it to gaze through clouds of gas and dust where stars are being born.

NASA is set to share the first official deep-space pictures from the $10 billion (£7.4 billion) observatory later this week.

The James Webb telescope has been described as a ‘time machine’ that could help unravel the secrets of our universe.

The telescope will be used to look back to the first galaxies born in the early universe more than 13.5 billion years ago, and observe the sources of stars, exoplanets, and even the moons and planets of our solar system.

The vast telescope, which has already cost more than $7 billion (£5 billion), is considered a successor to the orbiting Hubble Space Telescope

The James Webb Telescope and most of its instruments have an operating temperature of roughly 40 Kelvin – about minus 387 Fahrenheit (minus 233 Celsius).

It is the world’s biggest and most powerful orbital space telescope, capable of peering back 100-200 million years after the Big Bang.

The orbiting infrared observatory is designed to be about 100 times more powerful than its predecessor, the Hubble Space Telescope.

NASA likes to think of James Webb as a successor to Hubble rather than a replacement, as the two will work in tandem for a while.

The Hubble telescope was launched on April 24, 1990, via the space shuttle Discovery from Kennedy Space Centre in Florida.